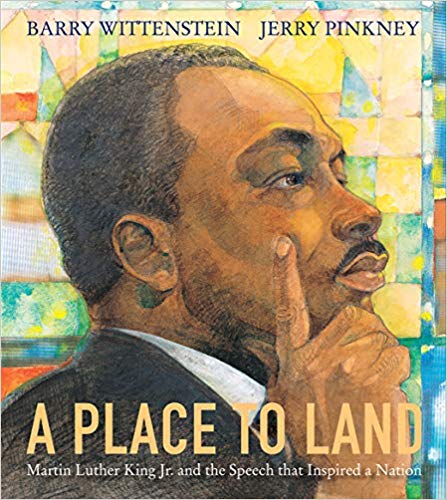 Back of Book:
Martin Luther King, Jr. was once asked if the hardest part of preaching was knowing where to begin. No, he said. The hardest part is knowing where to end. “It’s terrible to be circling up there without a place to land.”
Finding this place to land was what Martin Luther King, Jr. struggled with, alongside advisors and fellow speechwriters, in the Willard Hotel the night before the March on Washington, where he gave his historic “I Have a Dream” speech. But those famous words were never intended to be heard on that day, not even written down for that day, not even once.
My Review:
I received a copy of this picture book from  Neal Porter Books in exchange for an honest review.
I am always excited to read nonfiction books about strong figures that helped shape the course of history. A Place to Land is a stunning look a how Martin King wrote and constructed his “I Have a Dream” speech. It offers readers a new perspective on the story. I have read this famous speech many times and have never thought about the process behind it.
Barry Wittenstein allows readers to feel the confusion and complexity that King must have felt as he wrote his speech. I love that the story is broken up by hour markers. It allows readers to follow the timeline of events. Jerry Pinkney created detailed watercolors that capture the moments that one mans dream became a piece of our history. The back of the book has detailed notes from the author and illustrator about the process of creating this story. There is also information about the Willard Hotel advisors and the other voices who spoke that day with King.
This is the kind of book that needs to be shared in the classroom. It is a look at strength, character, courage, and perseverance.  Martin King was not concerned about what others thought of him. Instead, he bravely spoke from his heart and caused a nation to take notice.
Ages 7 and up
48 Pages