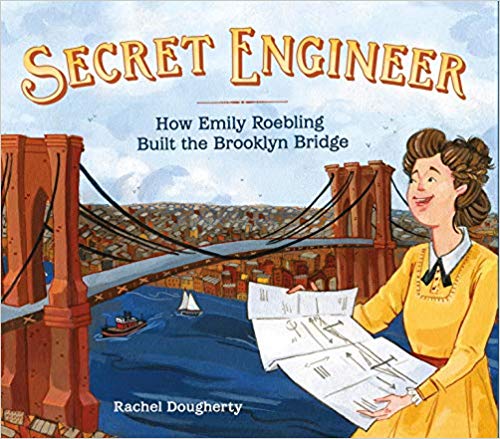 Back of Book:
It was the first trip across an engineering marvel that had taken nearly fourteen years to construct. The woman’s husband was the chief engineer, and he knew all about the dangerous new technique involved. The woman insisted she learns as well.
When he fell ill mid-construction, her knowledge came in handy. She supervised every aspect of the project while he was bedridden, and she continued to learn about things only men were supposed to know:
math, science, engineering.
Women weren’t supposed to be engineers.
But this woman insisted she could do it all, and her hard work helped to create one of the most iconic landmarks in the world.
My Review:
I received a copy of this picture book from author Rachel Dougherty in exchange for an honest review.
I was so excited when I saw that this book was being published. I was unfamiliar with the story that the Brooklyn Bridge was finished by a woman. I loved that Rachel described the many steps of building the bridge. I was fascinated to learn the process of how they built The Brooklyn Bridge. The story begins with Emily’s childhood and shows readers how her love for learning math and science allowed her to play such an important part in history. The text explains how unknown to everyone, Emily took over the building of the bridge. She was never given the recognition she deserved. This amazing book shows readers how strong and courageous women can be. The illustrations are detailed and show readers close up examples of the building of the bridge. The back of the book has more information about Emily Roebling as well as a glossary and pictures of the completed Brooklyn Bridge. This is an amazing story to add to any STEM or National Women’s unit. A must-have for elementary and school libraries.
Ages 6 and up
40 Pages